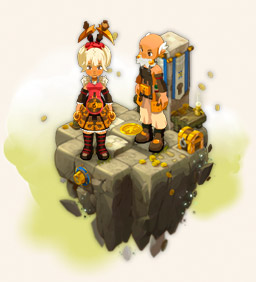 Enutrofs are the gold rushers of the World of Twelve - they like nothing more than counting booty and you'll often see all sorts of adventurers following them around, just waiting until their Enutrof nose smells out the next gold mine. Their motto is simple: "Of greed make an art". You'll often hear them whisper it as they're pushing children out of the way in the search for rubies, or some other horrible activity. Their god, a Golden Dragon from the skies, gave them the knowledge of all valuable things.

The Enutrof was first introduced in Ankama's first title, Dofus. They were shown as human characters in their senior years. Noted for their excellent prospecting skill, they were often used to collect rare and valuable treasures. In the latter of the levels, they produced paranormal bounds of damage with their powerful spells.

Their first appearance in Wakfu was as a tombstone. Later pictures revealed an arm sticking out of the ground holding a sort of document. This gave everyone something to talk about while Ankama finished designs for the Enutrof. The tombstone acted as a placeholder because the developer who was working on the Enutrof design had become a father for a second time. Franho, Xa's brother, provided the tombstone images while they finished.

Ankama previewed a small selection of spells during the initial design period of Wakfu. Though examples of the desired shape of the class, most of these spells didn't make it through to the current version without some alterations.