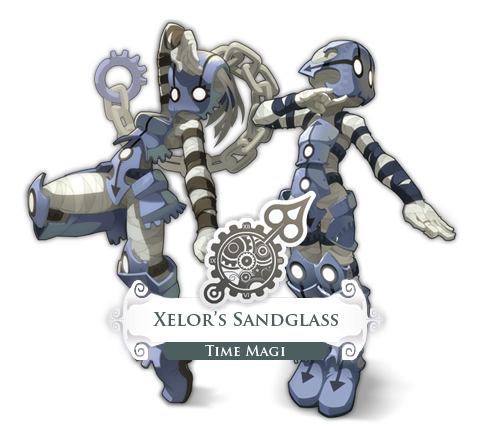 Xelor appear as mummy-like humanoids with robotic features. In the beginning there were no clocks, no watches, no cuckoos... not so much as a wooden stick stuck in the mud to tell the time with a simple shadow. Until one day, the god Xelor took up his Hammhour which shone with the light of timeless infinity. His great hammer fell upon the earth, and made a funny little noise - 'TICK'. Xelor struck once more, and behold, a ringing 'TOCK' resounded and Xelor saw that it was good. Placing the noises in his great satchel for safekeeping, he took some gears and, adding two or three Timemites, the god created the Divine Clock.

Xelor's disciples are created in the image of their god, and like their master, their favorite tactic involves messing about with ticks and tocks. For them, a clock hand packs more punch than the five-fingered kind and time is a lethal weapon - just watch them control the initiative and movement of their enemies.

They love using their tick-tock tactics to play with time. Fascinated with clockwork mechanisms of all kinds, they can’t bear to see a single second slip through their fingers… or a single enemy! Here’s a tip: if you see them fiddling with their clock hands, run for your life, or the bell will soon be tolling for you…

As patient students of technique, they are often to be seen passing the time with Otomai's Disciples.

The class spells available to members of the Xelor class are:

The Xelor class of Wakfu originated from the first Ankama title Dofus, in which they were a mummified character that controlled time and magic.

However, Ankama has completely redesigned their appearance, so that instead of being a small race, they are now the same height as everyone else. This is in part due to the technologies used to make Wakfu which means all the player models use exactly the same base model.

Ankama previewed a small selection of spells during the initial design period of Wakfu. Though examples of the desired shape of the class, most of these spells didn't make it through to the current version without some alterations.

Retrieved from "https://wakfu.fandom.com/wiki/Xelor?oldid=94600"
Community content is available under CC-BY-SA unless otherwise noted.