Wakfu Wiki
Register
Don't have an account?
Sign In
Advertisement
in: Cleanup required, Animated Series, The Brotherhood of the Tofu,
and 3 more

Brotherhood of The Tofu
The Real Boitards (Team Captain)

"The Child from the Mist"

Ruel Stroud is one of the main characters of the Wakfu: The Animated Series. As an Enutrof and old friend of Yugo's adoptive father, Alibert, Ruel was told to set off with Yugo and keep him safe. Like most Enutrofs, getting Ruel to do anything that's not in his own interest is an uphill battle, and his selfishness and greed often get him distracted. However, he's a seasoned fighter, and his knowledge of the world and its history is considerable.

Ruel Stroud is an old friend of Yugo's adoptive father Alibert, as well as a treasure and bounty-hunter known as an Enutrof.

Ruel comes from a long line of Enutrof's and owns an ancestral home that contains a large amount of gold. During his early childhood, it is shown that he was often neglected and mistreated by his Nana who claimed to have "spoiled" him.

Ruel had at one point owned a pet dhreller named Kama Tstar. However, after witnessing his pet drheller dying, he swore to never own a new dhreller again.

Before the series began Ruel was with Alibert the day he retired and also adopted Yugo. He has visited Alibert and Yugo several times at their restaurant.

At some point, Ruel developed a rivalry with female Enutrof named Arpagone, which turned into romance. Being Enutrofs, neither of them wanted to expand their riches on the other and even after they got married, they would meet only once a year to have a lunch together where they would bicker over who was going to pay for it. But as the years passed, Arpagone wanted more out of their marriage and even suggested they have children. Although he loved her, Ruel left Arpagone and never met with her again, breaking his wife's heart, as he didn't want to have children because that would mean spending his money on their upbringing.

Ruel came to visit Alibert and Yugo when encountered both Evangelyne and Amalia and attempted provide his services a tour guide but was turned down. Ruel visited Alibert's inn as usual and attempted to get a discount on his meal when he and Alibert witnessed Yugo's powers. On that day, they encountered the possessed Iop Guardian Sir Percedal rampaging. As a favour to Alibert, Ruel agreed to accompany Yugo on his travels.

Ruel is noteworthy for his incredible greed and stinginess, sometimes the only way to wake him up is to mention money. He can be so distracted by money he will completely ignore the danger they are in. He has incredible skill as a fighter and is committed to seeing Yugo through the trouble.

During the group's journey, Ruel had played several major roles and demonstrated his character when the team faced the Black Crow, Ruel was kidnapped as apart the Black Crow's plan to gain their kamas. He also single-handedly defended his home and treasure hoard from Gonnard the Great, an absorbent genie, whose body's substance becomes whatever he eats, which was mainly gold. He had plans for stealing Ruel's family treasure hoard. By eating his mass in gold it gave Gonnard incredible endurance. Ruel was able to take advantage of tricked him into eating chocolate coins that he took from Xav the Baker.

Ruel's biggest role was when the gang reached Bonta and needed a boat to get to Oma Island. Ruel was able to get them to participate in the Kingdom's annual Gobbowl tournament. He able to use his knowledge and skill of the sport to help his current and old team to win the game and receive the cash prize.

Though throughout the journey was followed by a baby drheller who would later play a role in Ruel's life.

When the gang reached Oma Island, Ruel and the others were able to meet Yugo's former guardian and also encounter Nox. During the encounter, the team learned of Nox's next plan was to steal the Wakfu energy of the Tree of Life, and also of Grougalogaran's revival in his Dofus. The team decided to split and strengthen they're bound by forming "The Brotherhood of the Tofu". Ruel travelled with the group heading to the Sadida Kingdom. While there the gang encountered Amalia's brother, Armand, who caused trouble for Ruel and Sir Percedal. Ruel was placed in prison for being friends with Percedal. He later escaped and came to terms with his past with his old dhreller and decided to raise his newest one which he named Kamasu-Tar-Junior, or 'Junior' for short.

Ruel was able to play a small role during the invasion when he used an old Enutrof drilling machine to travel back to the Sadida Kingdom and at the last minute crash into Nox's minion, Razortime.

During the invasion, he learned about Percidal's death and also witnessed Nox's attempt to absorb the Tree of Life and turn all the Sadida to wood. Nox then used the Wakfu he had accumulated to put his ultimate plan into action: turn back time 200 years in order to prevent the deaths of his family. However, the total Wakfu only sent them back 20 minutes, resurrecting Amalia, the Sadidas, and depriving Nox of all the Wakfu he'd worked to acquire. Unfortunately, it was already too late to save Percedal. Yugo allowed Nox to retreat, choosing to stay behind and mourn the death of Percedal, who had been killed in the battle with Razortime. Yugo and Adamai then decided to stay in the Sadida Kingdom and study the Eliacube. Ruel was among the others to honor Sir Percedal's memory with the creation of his statue.

When Evangelyne set out to search for Percedal, as she believed he was alive. She shot a recall arrow to Ruel and the others. When Yugo and Amalia enthusiastically held the arrow to go to where Eva was, Ruel was somewhat reluctant and hesitant. When they reached Rubilaxia, Ruel and Amalia got turned into Vampyro's zombies, leaving Yugo to fight himself.

Ruel is noteworthy for his incredible greed and stinginess. Sometimes, the only way to wake him up is to mention money. He can be so distracted by money he will completely ignore the danger they are in. Despite this, Ruel is committed to seeing Yugo and the others through the trouble. He is not without a heart, since he has proven at many times that he is very caring and kind, often serving as a bit of grandfather figure to others. He is also quite wise as well, due to having lived for so long. Although he can be a bit dim witted at times.

As an Enutrof, Ruel seeks fortune and wealth wherever he may find it, and he is as dedicated to preserving his own wealth to the point of exploiting any situation he can. Such as using his friendship with Alibert to get free meals at his inn despite Alibert constantly reminding him of his tab, he would rather pay the cheapest price possible even for a purchase of low quality (such as a rickety boat) and has even used trickery to flat-out swindle others out of their kamas.

Despite his greed, his sense of self-preservation (usually) matters more to him than acquiring monetary value, such as when the dragon Grougaloragran threatened the Enutrof to put his gold and kamas back otherwise Ruel would wind up in the dragon's belly, and Ruel complied out of fear for his life.

Ruel does embody the worst aspects of an Enutrof at times, such as the characteristic greed and selfishness that he eventually chose his wealth over the love and happiness of his wife Arpagone, leaving her after she suggested they start a family together, even though the decision weighed on his heart for decades afterwards.

As an Enutrof, Ruel is a fervent seeker of fortune and will utilise any means to get it. Despite his age, he is a surprisingly skilled fighter and Gobbowl player, and it was hinted that he is apparently more powerful than Evagelyne, Amalia, and even Percedal when they first encountered Grougaloragran, who identified the old Enutrof as the most powerful among the group with his Wakfu sensing.

Ruel seems to be able to talk to God Enutrof but he doesn't have very good relationship with Enutrof. But that doesn't mean they hate each other, Enutrof helped Ruel complete the cave in spell used to fight Grougaloragran. Ruel didn't want to replace Enutrof during the events of season 3 of the Wakfu animated series, but the strange thing is that Ruel wasn't so surprised about being a demigod.

Ruel is an old friend of Yugo's adoptive father Alibert, as well as a treasure and bounty-hunter known as an Enutrof. As a favour to Alibert, Ruel agreed to accompany Yugo on his travels.

Ruel is among Yugo's oldest friends and something of a grandfather-figure to him. He has known Yugo since the day that Alibert found him, and despite their history with each other they still have their disagreements - mostly due to Ruel's greed and stinginess and Yugo's methods that don't bring about profit. However, out of all the Brotherhood, Yugo had treated Ruel better, which Ruel points out and saying how Yugo is the nicest one. When Yugo left on his own journey, Ruel mentions how much he missed having Yugo around. It is revealed in the manga that Ruel has made Yugo the heir to his vast store of wealth

When he was younger, Ruel met Arpagone, another Enutrof fortune seeker, and they developed a rivalry. But before he knew it, Ruel and Arpagone fell in love and even married. At first, due to both Enutrofs being so stingy about their money, they chose to meet once a year at their favourite restaurant in the city of Bonta to have lunch together (and bicker over who would pay for the meal). But as the years passed, Arpagone wanted more, and she suggested to Ruel they start a family. Although he loved her, Ruel left Arpagone and never met with her again, breaking her heart, purely because he didn't want children as that would mean spending his money on their upbringing. However, this act of selfish greed weighed on Ruel’s heart for many years. It is evident he still loves her, but his past decision stills affects his relationship with her. Meanwhile, Arpagone is still deeply in love with him, albeit still angry, and believes that by replacing the God Enutrof with Ruel, they can both live forever, rich and in love, just like they originally planned.

They met again many years later, where Arpagone joined The Siblings to convince Ruel to replace the Enutrof god. 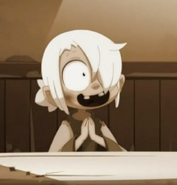 Ruel as a child. 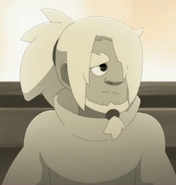 Ruel as a rock singer.
Community content is available under CC-BY-SA unless otherwise noted.
Advertisement