Range determines the targeting distance for a spell or attack. An action will have a minimum and a maximum Range. You cannot directly target someone who is closer than the minimum range of a spell, or further than the maximum range.

Each point of Range is equal to one step on the combat grid. So adjacent Cells are counted as nearer than corner Cells. 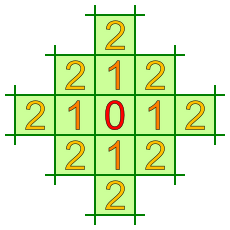 A number of spells, and effects, can alter a caster's Range Bonus Characteristic. This bonus, or penalty (if it's negative), is applied directly to the target, so anything they use may be effected by it. Not all spells will be effected by this, with some having a fixed and unalterable range instead (whether a spell has a fixed range, is specific to each spell).