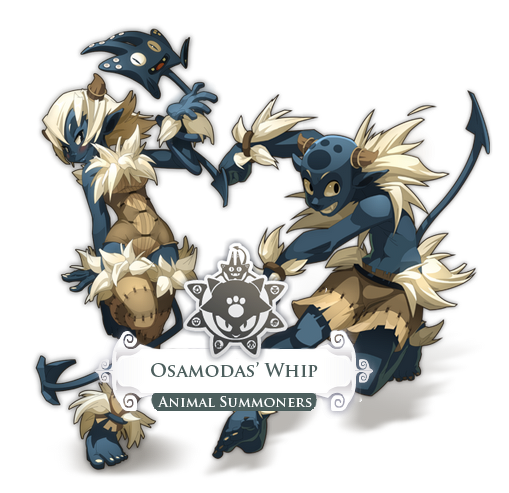 Osamodas are a race of devil-like humanoids with blue skin and white hair. They don't bat an eyelid at a thundering herd of Minotorors. The terrifying shriek of a Kwak has no effect on them. The howling of a hundred hungry Boowolves is music to their ears... who are they? Osamodas, that's who! The Osamodas you knew from the age of DOFUS have changed a lot in the 1,000 years up to the time of Wakfu. They witnessed the destruction spread by Ogrest's disastrous woe and wound up caring more for the fragile creatures of the World of Twelve than ever before. After all, what would happen if all life disappeared from the earth?

It all goes back to their legends which convince them that all living things were created by the Three Dragons of Osamodas. That I can just about believe, but when they start telling you that these fire-breathing triplets had something to do with the big bang, well, that's just too much to swallow. But they are good of heart and their civilization is founded on caring for the beasts that roam the islands. They might smell a little beastly themselves sometimes too, but we can forgive them for that. You'll usually see a Gobgob hopping along beside them - this little creature helps them capture souls which they then summon in combat.

Disciples of Osamodas are usually members of Those Who Walk and the Sisters of Dathura.

The class spells available to members of the Osamodas class are:

The Osamodas class of Wakfu originated from the first Ankama title Dofus, in which they were characters that summoned monsters.

They also have been changed from Closed Beta where you could summon as many monsters as you could (limited to your Command points and WP).