Ogrest is a gigantic blue-eyed ogre, and has been present since the Dofus era. He is a great beast who caused Ogrest's Chaos, effectively flooding the world, and even sinking the nation of Sufokia to the bottom of the ocean.

Ogrest was accidentally created from Ogrines and a piece of candy a long time ago by a Feca alchemist named Otomai.

He was infatuated by Dathura and for her. He, filled with determination, tracked down and acquired the powerful Six Primordial Dofus, and in doing so gained more power than the gods of the World of Twelve.

Unfortunately, the deceptive and manipulative Dathura only cared about the Dofus and, in a fit of woeful rage, he willingly threw her into an abyss.

He then grievously trudged to the peak and summit of Mount Zinit to despair, mourn, and everlastingly cried, alas, causing the great deluge that flooded the World of Twelve, dividing it into the various Nations and lands that we know now in the Wakfu era.

Ogrest now stands as the primary villain of the world of Wakfu, the Ogre which every aspiring disciple of the twelve everlasting gods long to defeat.

Ogrest sits at the top of Mount Zinit and can cause the damaging Ogrest's Chaos to random Nation areas, disturbing their ecosystems. 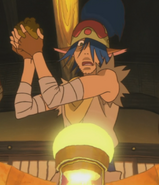 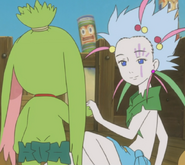 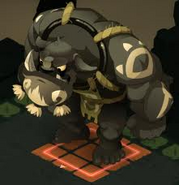 Ogrest.
Community content is available under CC-BY-SA unless otherwise noted.