Lu-Fu are creatures from an unknown planet who were recruited by the Mechasm Orgonax in his second attack against Eliatropes, around the year -10000. They have only been seen so far in the game Islands of Wakfu, where they represent the better part of the enemies that oppose Nora and Efrim.

Lu-Fu are dog-like creatures starved for Wakfu, once a peaceful people who have been enslaved and now hate the Eliatropes as much as Orgonax. Furless and gangly in Islands of Wakfu, they are seen in a dream sequence looking much more like healthy anthropomorphic dogs. The same sequence shows that they were ruled by an Imperatrix, who chose to give up the fight after many of her kin were taken away in spaceships and let the rest of her people die quietly on their planet. Through this dream, Nora and Efrim learn that the Lu-Fu are driven by desperation, and their hatred toward Eliatropes adds another layer to the mysteries of the Eliatropes' history.

In the attack against Vili, the Lu-Fu are led by Odo, a larger individual who, unlike them, looks more than well-fed and has conserved his fur. He is depicted as a greedy and ruthless leader, always hungry for Wakfu, who rarely gets involved directly. Odo answers only to Orgonax and is directly responsible for the death of Glip, Nora and Efrim's mentor. 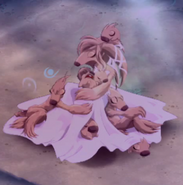 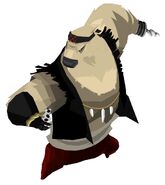 Add a photo to this gallery
Retrieved from "https://wakfu.fandom.com/wiki/Lu-Fu?oldid=92124"
Community content is available under CC-BY-SA unless otherwise noted.