"This splendid costume will make you look classy... for once."

Jade Dynast is part of the Dynast Legacy costumes. It is one of the few costumes that is animated. For a long time, this costume has been very popular. Players would wear it on their petsmounts, especially on dragosteeds with a special harness.

Jade Dynast can be obtained by buying it from the boutique or in-game marketplace. 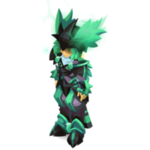 Add a photo to this gallery
Retrieved from "https://wakfu.fandom.com/wiki/Jade_Dynast?oldid=88989"
Community content is available under CC-BY-SA unless otherwise noted.