Igôle (re-named Crazy Eye by Lotie) is a beast formerly owned by Nox and one of his most powerful minions. He is currently owned by Master Drill's daughter Lotie at their home on the desert island.

His appearance looks very different between the series and the Nox TV special since the special was animated in a completely different art style than the series.

In the series, he has colors that look very akin to a hyena, with a mane like a lion, and a body similar to that of a weasel or a lizard.

In the special, he looks more like a typical dog with a white colored head and a black colored body with white spots. 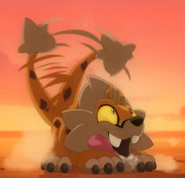 Igôle as a puppy.
Community content is available under CC-BY-SA unless otherwise noted.
Advertisement