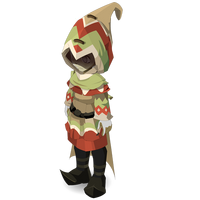 Hoodlums are a humanoid group of monsters which can be found anywhere. They can be found as solo creatures in low level areas, though they are individually around level 55 upwards (so they will be too powerful for any new characters who frequent those areas).

In other areas, the size of the group grows.

Outside of combat, a Hoodlum will appear in their basic cloak and hat. Once engaged in combat, they will reveal their true form as one of the classes available to Player Characters. It is also not possible to see their level outside of combat.

Hoodlums cannot be extracted or Harvested. Hoodlums most likely spawn naturally since they don't have seeds.

Each Hoodlum is built to a follow a specific behavior in combat, generally focusing on specific spell-combinations available to their specific class (such as an Air Sacrier using teleporting and Motion Sickness).

Hoodlums drop a variety of equipment and Haven bag Decorations. These drops are usually specific to their revealed class, and the equipment provides a direct bonus to specific spells from that class.

Monsters from this family: