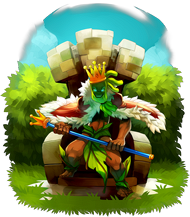 Governor is the person in charge of the nation, chosen by citizens through voting during an election period. To be a candidate for the post, the player needs to have over 1000 Citizenship Points and pay 3000

For the duration of his term, the Governor can recruit citizens of their Nation to help in the administration.

The governor can recruit for the following roles:

All positions requires 100 Citizenship Points except for Vice-governor, which requires 1000 CP. Some have further requirements. The Governor can't name the same player to fill more than one role, and doesn't need to fill all roles, or any at all. These positions may be changed at any time.

Every citizen that participated in the election of the current governor can show how they like him. If a governor becomes too unpopular, they will be kicked out of office and an early election will be held to choose another governor.

The system adds every vote with the according number of points and then divides it by 100. The result needs to be lower than -0.7% for the governor to be successfully kicked.

Any governor who achieves a 50% popularity rating will receive statues of themselves in their Nation's HQ.