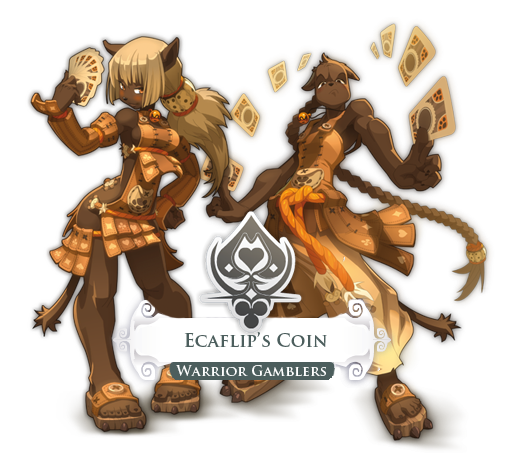 They are used to gambling on chance. In battle, you'll never know if the next blow coming from the enemy with the catty head will knock your socks off or leave you untouched... they collect game cards and have made fearsome weapons out of them, leaving the swords of the past to other fighters. They might even read your future in these cards... but if they're lucky, you might not want to know what it is!

Ecaflips are compulsive warrior-gamblers who jump headlong into risky situations just for the thrill of it! Oh, and contrary to what you might have heard, they don’t always land on their feet… Not that they care, as long as the adrenaline keeps pumping! So, ready to up the ante?

The class spells available to members of the Ecaflip class are:

The Ecaflip class of Wakfu originated from the first Ankama title Dofus, in which they were a Risk taking character that utilising a number of cat- and gambler-themed skills.

Retrieved from "https://wakfu.fandom.com/wiki/Ecaflip?oldid=94369"
Community content is available under CC-BY-SA unless otherwise noted.