"Specialized in the Water element, the Drop Knight is a master in the art of support, healing, and providing bonuses for his allies. He's equally capable of dealing damage while supporting his teammates in optimal ways. Discover all his abilities on the encyclopedia."

Specialized in the Water element, the Drop Knight is a master in the art of support, healing, and providing bonuses for his allies. He's equally capable of dealing damage while supporting his teammates in optimal ways. Working as assassins, mercenaries, brigands and bodyguards, the Dark Knights have had a fearsome reputation for hundreds of years. From a long line of exceptional fighters, they are able to enhance their mastery of the elements through their favorite weapon—the Tormentator. These magical pistols channel and focus the user's elemental power and shoots it out with devastating force. The original Dark Knights were peculiar children, five brothers: Flame, Drop, Cloud, Leaf and Shadow. They discovered their powers when they reached adolescence and each received a specially created Tormentator from their adoptive father. Lead by Shadow, the Dark Knights became consumed with their power and rebelled, killing their adoptive father before fleeing to Bonta. No one knows what became of the five Dark Knights. It is said that new generations of Dark Knight are created as these Tormentators are passed down over the years, although whether this a blessing or curse is a matter of opinion. But who knows and who would dare find out if the people behind the Dark Knights' faceless masks are any different from the original five from 600 years ago? 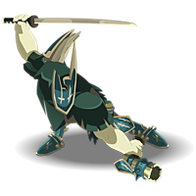 Do you feel washed out? Nothing a good spa treatment and some fresh air won’t fix! The Drop Knight is your best ally. Saverne’s third son is coming to the Shop! And until November 9, you’ll get him free with every purchase of a pack of 11,000 or more Ogrines!

Free like a river, his chosen element, the Drop Knight targets your enemies from a distance while staying out of reach. He taunts them from afar while giving you unequaled combat support. It’s pretty simple–his job is giving his allies health!

Retrieved from "https://wakfu.fandom.com/wiki/Drop_Knight?oldid=90014"
Community content is available under CC-BY-SA unless otherwise noted.