Start a Wiki
Demons are evil spirits that hate all living things so they destroy all livings things around them. The beginning of all demons start from the beginning of the universe, when the first 10 demons were born they were the many embodiments of death and destruction the basic opposite of the Gods. The Gods are the creators and Demons are the destroyers. The 10 demons era didn't last long because one of the brothers Rushu wanted to rule the demons (weaker demons) without his other 9 brothers so he hunted and killed his brothers one by one, the only beings strong enough to defeat him until it was only him and so he created the shushus. 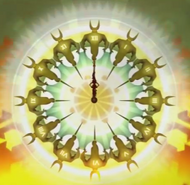 Demons of the hour
Add a photo to this gallery
Retrieved from "https://wakfu.fandom.com/wiki/Demon?oldid=94250"
Community content is available under CC-BY-SA unless otherwise noted.