The Quest for the Six Dofus Eliatropes - Book 1: The Throne of Ice

Count Harebourg is a Xelor who wields ice and time magic and is a member of The Siblings.

Prior to the events of Dofus and Wakfu, Count Harebourg somehow contacted the Goddess Jiva, the guardian of the month of Javian, and granted him possession of the Glacial Dofus. Using it alongside a massive water clock he built, Harebourg was able to steal days of the month of Decendre and essentially skipping the harsh, cold winter it brings, ensuring Frigrost a warm and plentiful year. However, the Demon Djaul, inchargeof the month of Decendre, took Jiva and the Dofus and trapped Frigost on eternal winter and Harebourg in solid ice.

In the MMO Wakfu, Harebourg is thawed out of an icy prison by the hero and immediately strikes against him/her, later fleeing to the Wabbit island where he steals a Dofus hidden within the isle. In the events called "Eliocalypse", Harebourg is once again an important character, looking for anomalies in time and casting his influence over Pandalucia and the Sadida Kingdom. He is later followed to the Xelorium, the dimension of the God Xelor, where the player listens to his pleas of wanting to save the World of Twelve and his revelation of being a son of Xelor. He is defeated once again and fade in hiding.

Ush, Sipho, and Harebourg conspired to steal the Six Eliatrope Dofus, with Count Harebourg taking two of them to his kingdom of Frigrost. He was tasked with keeping them safe but selfishly decided to use them as bargaining chips to "encourage" the Sadida into an alliance by offering a uniting of their kingdoms by marrying their princess Amalia Sheran Sharm. In exchange for her had, he would return the Dofus to Yugo and Adamaï.

But when they arrived, Harebourg went back on his word, "asking" Yugo to help him use the Dofus to power his kingdom. Yugo refused and tried to attack the Xelor but Amalia, driven by her duty, stopped Yugo while Harebourg entrapped the rest of the Brotherhood of The Tofu (minus Adamai who was away on another mission) in magical ice.

After the Brotherhood broke free of the ice, Evangelyne told Yugo to stop the wedding when they discovered the true reason Harebourg wanted to unite his kingdom with the Sadida, to cut down their forests as fuel for his kingdom's furnace and main power source.

Once Yugo objected to the wedding and revealed this to Amalia, Harebourg finally revealed his true colors as a self-righteous hypocrite and deceiver as he then proceeded to overwhelm Yugo, blaming him for Harebourg having to resort to these extreme measures because the young Eliatrope would not show him how to use the power of the Dofus.

The rest of the Brotherhood of the Tofu arrived and Amalia finally stopped Harebourg and their exchange caused the Xelor to give up but flee. He went to Lady Echo who admonished him for his actions and punished him by entrapping him in his own ice.

Count Harebourg is an slender and attractive young man with white hair, caucasian skin and light blue eye, his left eye have an red scar over his pupil-less eye, he uses an brown, white and yellow cloak with an grey Xelor symbol, an dark cyan jumpsuit with an light teal stripe an belt, white gloves and brown boots, his mask is an grey and it's coreved in an large piece of ice.

Chronokinesis - As a Xelor (and the son of the God Xelor himself) Harebourg's area of expertise is time magic, manipulating time in order to paralize others (with the aid of mechanical owls called Sinistros in the game), teleport himself and release blasts of energy.

Cryokinesis - Harebourg also wields ice alongside traditional Xelor magic, possibly pure affinity to the element or caused by the time he spent frozen, immersed into the element itself.

Mechanical Expertise - Natural to many Xelors, Harebourg is able to design and build complex clockwork machinery, such as the one used to keep Frigost warm despite the overwhelming blizzard and even restore some of Nox's mechanics.

According to Harebourg, he did truly have feelings for Amalia but was willing to use the Sadida Kingdom to save Frigrost. He claims that through the remaining contraptions of Nox's clock, he watched her through her adventures. 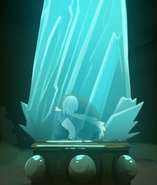 Harebourg in Season 3 after being frozen by Echo.
Community content is available under CC-BY-SA unless otherwise noted.
Advertisement