This page contains spoilers for the Wakfu cartoon.

Chibi is the Eliatrope twin of Grougaloragran and was presumably the earliest king of the Eliatrope people (before his last reincarnation). In his previous life, he ruled over the Eliatrope people as prophet-king and member of the Council until he somehow sensed that his death was imminent. He decided to name a successor and chose Yugo over Qilby. According to Qilby, he helped to create the Eliacube from the stolen heart of Orgonax, though this is probably a lie.

In his previous lives, Chibi was a tall, white-haired man with tan skin. He wore a black cloak and a black hat with two long "horns" and no tuft on the end.

When he reincarnates during the animated series, he is a white-haired infant with dark brown eyes. It can be assumed that his eye color was the same in past incarnations. Between the second season of the show and the OVAs, he grows into a small child who wears a black sleeveless shirt, a wide brown belt, grey pants, and black boots. His new hat, made by Alibert, is dark brown. As of the OVAs, his hat is still too large and the "ears" on top of it are somewhat floppy.

After being reincarnated, as a young child; Chibi isn't above getting free snacks with Grougal's aid through sneaky tactics, but in contrast to his dragon twin who proves to be a difficult handful, Chibi doesn't like being scolded and wilts when he is - though when he's upset this way, he's good at gaining leniency from Alibert through a 'puppy-dog eyes' effect. He also cries easily, though he's otherwise quite a cheerful child. He seems to appreciate and enjoy Grougal's antics, and he also seems eager to watch from the sideline when something draws his attention, like watching his family prepare food or observing the incident in which Grougal nearly eats Otomai.

Chibi belonged to the first six Eliatrope's (the Eliatrope Council) that were born on their home planet along with their dragons. Chibi is the Eliatrope brother to Grougaloragran and was the previous ruler of the Eliatrope people, before stepping down after sensing his death was near, to which Chibi later passes before the war started, naming Yugo as the next ruler. After the war with the Mechasms, the rest of their people who survived, escaped into Krosmoz in search of a new planet to call home, where Yugo is Chibi's successor to the throne.

Yugo and Adamaï attempt to use the Eliacube, drawing extra energy from Chibi and Grougaloragran's dofus, in episode 6. As a result, the dofus 'hatches' and Chibi and his brother Grougaloragan are reborn from their dofus as infants. In using the Eliacube however, Yugo and Adamai also summon an old enemy from a time long past, Qilby. Yugo, Adamaï, Qilby and the newly reborn brothers are then taken back to the Castle.

Later on, Qilby tells everyone the story of Eliatrope's and their Dragons, but since Yugo's and Adamai's rebirth erased their memories, Qilby used this to his advantage to twist the truth. Where he changes Chibi's position to the "inventor", Yugo's position to the "champion" of their people and himself (along with his dragon sister Shinonome) as "king and queen" of the Eliatrope people. When in truth, it was actually Chibi who was their first king, Yugo as the second king and Qilby as the inventor/scientist.

After this Yugo makes a promise to the infant Chibi that he would bring back their people, once again, to the World of Twelve. Yugo and the rest of the Brotherhood of the Tofu, except Adamaï, then go off on another journey in search for Qilby's and Shinonome's dofus. Chibi is left under Alibert's and Adamai's care, along with the infant Grougaloragran.

He is seen at Alibert's restaurant; following Qilby's defeat, Chibi and Grougal are evidently being raised by Alibert alongside Yugo. 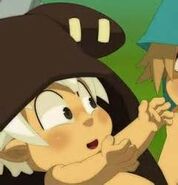 Chibi Baby form
Add a photo to this gallery
Retrieved from "https://wakfu.fandom.com/wiki/Chibi?oldid=96734"
Community content is available under CC-BY-SA unless otherwise noted.